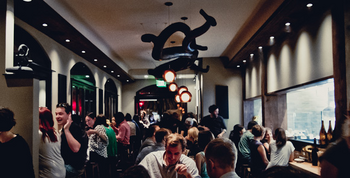 Namu Gaji means tree branch in Korean. The restaurant was named after the cypress tree that was salvaged from Golden Gate Park and transformed into their bar. Namu Gaji was founded by three Korean American brothers (Dennis, Dan, and David Lee) and the restaurant's fusion cuisine uses seasonal, local, and regional ingredients to create a menu that changes daily and with the season. The original Namu was in Richmond, but closed in 2006 before opening again as Nemu Gaji in Mission. The new Namu still attracts old regulars, as well as a swarm of new clientele!